Neta Bodner. 2015. “Earth from Jerusalem in the Pisan Camposanto.” In In Between Jerusalem and Europe: Essays in Honor of Bianca Kühnel, Pp. 74-93. Leiden: Brill. Publisher's Version 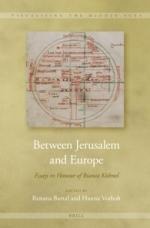 Just north of the cathedral, the baptistery, and the leaning bell tower of Pisa is a building known by the name ‘Camposanto’. The structure, begun in 1278, has been the subject of extensive study, both on its own and in conjunction with the cathedral, the campanile, and the baptistery of Pisa. Nevertheless, a central aspect of the Camposanto’s history—a legend according to which it was founded on earth brought in 1188 by the Pisan archbishop Ubaldo from Jerusalem—has not been analysed. This legend, which thus far has only been treated as anecdotal back- ground in discussions of the Camposanto, is the focus of this article.