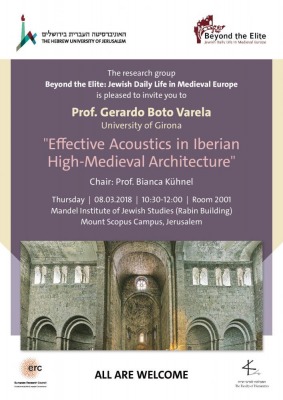 Prof. Boto Varelo from the University of Girona has conducted a workshop discussing the development of cathedral cities during the Middle-Ages.

In the first session (05/03/18), we studied the impact of cathedrals on urban planning and development – through the prisms of architecture, institutions and people. Since cathedrals have been a monumental aspect of European urban landscape and for centuries, we tried to understand how church has marked the city and shaped the public space.

In the second session (07/03/18), Prof. Boto Varela presented Tarragona as an unusual case study of medieval urban settlements, while comparing it to other medieval European cathedral cities. He showed that while the Roman past of Tarragona influenced the layout of medieval settlement, citizens organized the new city according to new ideas and needs.

We also toured the old city of Jerusalem, visited the Holy Sepulcher, Church of the Redeemer and the Cardo, learning about the relationship between cathedrals, the space surrounding them and urban activities.