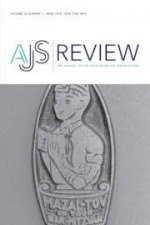 Through a linguistic analysis of the Hebrew Lord's Prayer, this article endeavors to reach a new understanding of the function of this text in the lives of its users, concluding that the ninth-century Carolingian writer/translator meant for this text to be sung aloud. This article goes back to the basics of textual research—philology and language study—in order to determine the correct historical framework through which to understand this much-debated text, thus adding to our understanding of the religious life and practice of the nuns of Essen at the polyglottic crossroads of Latin and German, Hebrew and Greek. This paper is also an invitation for future studies to continue its effort to rewrite the history of Hebrew in the church, for historians to broaden their toolbox, and for linguists and philologists to contribute their insights to other fields.

tzafrir_barzilay_chidushim.pdf
Bodner, Neta, and Ariella Lehmann. “"So that a Person Sees Himself as if he was Created that Very Same Hour": On the Ritual Immersion of Men, Utensils, and the General Public in Medieval German Mikvehs.” Chidushim 21. Chidushim (2019): 47–83.

neta_bodner_and_ariella_lehmann_chidushim.pdf
Levinson, Eyal. “"Those Who Grow their Forelocks and Wear the Clothes of a Knight": Young Jewish Men in Medieval Germany, between Rabbinical Masculinity and Chivalric Masculinity.” Chidushim 21. Chidushim (2019): 14–46.

elisheva_baumgarten_chidushim.pdf
Baumgarten, Elisheva. “Ask the Midwives: A Hebrew Manual on Midwifery from Medieval Germany†.” Social History of Medicine 32, no. 4. Social History of Medicine (2019): 712–733. Abstract
Summary This article focuses on a chapter in a manual on circumcision written in Worms in the thirteenth century by Jacob and Gershom haGozrim (the circumcisers). The third chapter of the manual contains medical instruction on how to attend to women in labour and other gynaecological conditions. Whereas the first two chapters of the manual were published in the late nineteenth century, the midwifery chapter has only been recently examined. This article is comprised of a translation of the midwifery text(s) along with an introduction to the text and the community practices it reflects. It outlines the cooperation between medical practitioners, male and female, Jewish and Christian, and discusses the medical remedies recommended and some practices current in thirteenth-century Germany.
Kohn, Albert. “Furnishing Piety: Beds in High Medieval Jewish Domestic Devotion.” Religions 10, no. 8. Religions (2019): 471. Abstract
In recent years, pre-modern beds have generated extensive scholarly interest. Their social, religious, and economic importance has been rightfully highlighted in the study of domestic piety. Yet, concern has primarily focused on beds in late medieval English homes. This essay uses Hebrew texts from thirteenth-century Southern Germany, primarily Sefer Hasidim, to further this analysis of the role of the bed in shaping medieval domestic devotion. Jewish notions about the social, moral, and sexual significance of the bed reflect those identified in late medieval Christian culture. These ideas inspired numerous rituals practiced in Jewish homes. Yet, the bed and the remnants of sex assumed to be found in it also frustrated Jewish attempts to perform domestic devotion. These findings highlight the complicated nature of the home and how medieval people had to navigate both its opportunities and challenges in order to foster a rich culture of domestic devotion.

chidushim_21.pdf
2018
Baumgarten, Elisheva. “Four mothers in three stories from medieval Northern France.” Zmanim: A Historical Quarterly 139. Zmanim: A Historical Quarterly (2018): 70–77.
Noy, Ido. “Love Conquers All: The Erfurt Girdle as a Source for Understanding Medieval Jewish Love and Romance.” IMAGES 11, no. 1. IMAGES (2018): 227–246. Abstract
Abstract The discovery of pawned objects in treasure troves attributed to Jews enables investigation of the use and understanding of these objects by Jews, especially regarding those of a more secular nature, i.e. objects that have little relationship to Jewish or Christian liturgy and that lack explicit Jewish or Christian religious iconography or inscriptions. One of these pawned objects is a girdle, which was found in a Jewish context in Erfurt. Through examining this girdle in the context of similar imagery in Jewish art, we see that Jews were not only exposed to such girdles but also were well aware of their symbolic meaning in noble love and romance .
Baumgarten, Elisheva. “Appropriation and Differentiation: Jewish Identity in Medieval Ashkenaz.” AJS Review 42, no. 1. AJS Review (2018): 39–63. Abstract
This article discusses the ways scholars have outlined the process of Jewish adaptation (or lack of it) from their Christian surroundings in northern Europe during the High Middle Ages. Using the example of penitential fasting, the first two sections of the article describe medieval Jewish practices and some of the approaches that have been used to explain the similarity between medieval Jewish and contemporary Christian customs. The last two sections of the article suggest that in addition to looking for texts that connect between Jewish and Christian thought and beliefs behind these customs, it is useful to examine what medieval Jews and Christians saw of each other's customs living in close urban quarters. Finally, the article suggests that when shaping medieval Jewish and Christian identity, the differences emphasized in shared everyday actions and visible practice were no less important than theological distinctions. As part of the discussion throughout the article, the terminology used by scholars to describe the process of Jewish appropriation from the local surroundings is described, focusing on terms such as “influence” and “inward acculturation,” as well as “appropriation.”
Baumgarten, Elisheva. “‘Like Adam and Eve’: Biblical Models and Jewish Daily Life in Medieval Christian Europe.” Irish Theological Quarterly 83, no. 1. Irish Theological Quarterly (2018): 44–61.
Baumgarten, Elisheva. “Praying separately? Gender in medieval Ashkenazi Synagogues (thirteenth-fourteenth centuries).” Clio. Women, Gender, History 44. Clio. Women, Gender, History (2018): 43-62.Abstract
This article explores the place and religious activities of medieval Jewish women in northern France and especially in Germany during the High Middle Ages. The centrality of the synagogue in Jewish life in medieval Ashkenazi communities invites a reassessment of the role of women in the synagogue and of their ritual participation more generally. The article is based on four exemplary case studies, the first of which relates to Dolce, the famous wife of the German rabbi R. Eleazar b. Judah. The article then addresses the question of women’s presence in the synagogue when menstruating and during the circumcision ceremony, and ends with a look at changing attitudes toward women benefactors. Based on an analysis of liturgical, archaeological, halakhic and poetic sources, this article demonstrates the extent to which women were active and present in Ashkenazi synagogues and provides an explanation of their gradual segregation and marginalization starting in the thirteenth century.
Barzilay, Tzafrir. “Retelling the Crusaders’ Defeat in Hungary: Cultural Contact between Jewish and Christian Chroniclers.” Jewish History 31, no. 3-4. Jewish History (2018): 173-196. Abstract
This essay examines similarities between the Hebrew chronicle of Shlomo bar Shimshon and the Latin chronicle of Albert of Aachen. Both sources describe the massacre of Rhineland Jews during the First Crusade and the subsequent defeat of the Crusaders by the Hungarians and the Bulgarians. On the basis of similarities in structure, content, and language between these two accounts, I argue that Shlomo chose to integrate at least one Christian source into his narrative. At the same time, I assert that it is unlikely that Shlomo’s Hebrew account was translated directly from Albert’s Latin chronicle. I present evidence indicating that the information conveyed in the Latin text reached the Jewish chronicler via vernacular channels, either oral or written.