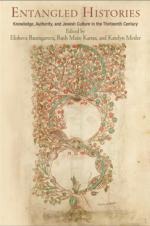 From Halakhic innovation to blood libels, from the establishment of new mendicant orders to the institutionalization of Islamicate bureaucracy, and from the development of the inquisitorial process to the rise of yeshivas, universities, and madrasas, the long thirteenth century saw a profusion of political, cultural, and intellectual changes in Europe and the Mediterranean basin. These were informed by, and in turn informed, the religious communities from which they arose. In city streets and government buildings, Jews, Christians, and Muslims lived, worked, and disputed with one another, sharing and shaping their respective cultures in the process. The interaction born of these relationships between minority and majority cultures, from love and friendship to hostility and violence, can be described as a complex and irreducible "entanglement." The contributors to Entangled Histories: Knowledge, Authority, and Jewish Culture in the Thirteenth Century argue that this admixture of persecution and cooperation was at the foundation of Jewish experience in the Middle Ages.