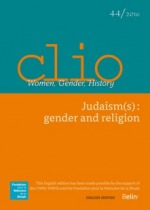 This article explores the place and religious activities of medieval Jewish women in northern France and especially in Germany during the High Middle Ages. The centrality of the synagogue in Jewish life in medieval Ashkenazi communities invites a reassessment of the role of women in the synagogue and of their ritual participation more generally. The article is based on four exemplary case studies, the first of which relates to Dolce, the famous wife of the German rabbi R. Eleazar b. Judah. The article then addresses the question of women’s presence in the synagogue when menstruating and during the circumcision ceremony, and ends with a look at changing attitudes toward women benefactors. Based on an analysis of liturgical, archaeological, halakhic and poetic sources, this article demonstrates the extent to which women were active and present in Ashkenazi synagogues and provides an explanation of their gradual segregation and marginalization starting in the thirteenth century.