Erfurt is an exceptional site, preserving many aspects of local medieval social history: architecture in situ, manuscripts, inscriptions and various material objects, which together form a well-rounded picture of medieval Jewish life. We were privileged to be guided by Dr. Karin Sczech, of the Thüringische Landesamt für Denkmalpflege und Archäologie in Weimar, and Ms. Sarah Laubenstein, commissioner for the UNESCO World Heritage in Erfurt.

The medieval synagogue building is the oldest still standing in Europe, dating from the late 12th century. We discussed its exterior and interior architecture, the different building stages and its urban context. The museum, housed in the synagogue, exhibits the Erfurt treasure trove. Discovered in 1998, the exhibition consists of jewelry, tableware, coins and ingots from the middle of the 14th century. In addition, the museum houses facsimiles of Erfurt Bible and other manuscripts. The medieval mikwe is situated some 100 meters from the synagogue, on the banks of the water channels of the Gera river. Dr. Sczech, who excavated the site, described the story of its accidental discovery. She also pointed out some of the unique architectural features of the mikwe and explained how they might indicate the actual use of the structure in the Middle Ages. The team in Erfurt has also begun work on Jewish tombstones from the first Jewish settlement in Erfurt, dating from the late 11th century through 1349. The tombstones were found both where the old cemetery was located and also scattered around the area in other sites as Spolia. We were extremely impressed with the attempt to make Erfurt’s medieval Jewish history accessible to the public as well as scholars, and the way in which Jewish history is understood and presented as an organic part of Erfurt’s urban fabric. 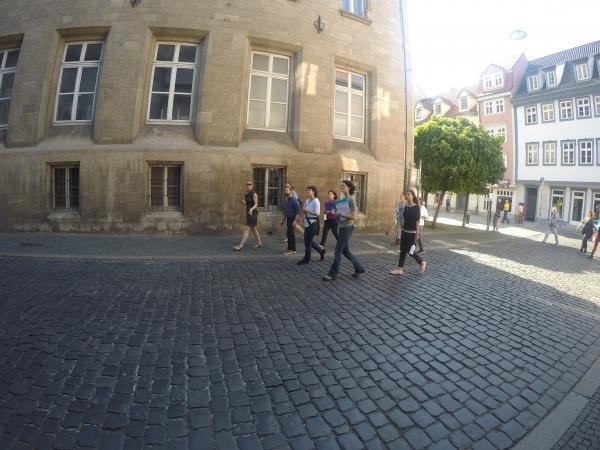 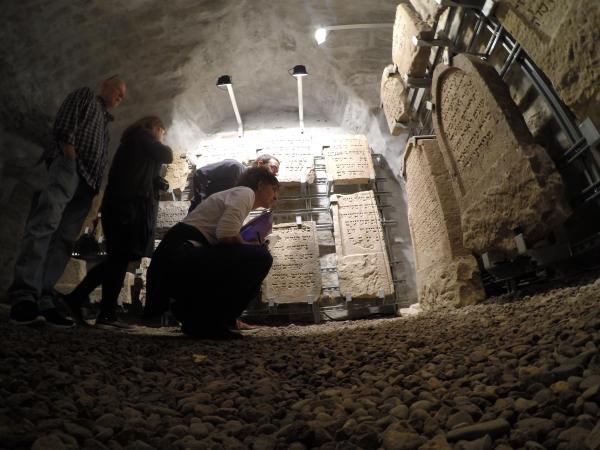